A 10 minute video by Carlo Caldana about how Kevin came to his painting technique
and how it's related to his color-blindness.

Carlo is a San Francisco filmmaker whose first two feature films Kevin worked on
in the '80s in his previous incarnation as a Director of Photography.
Kevin R. Brown is a native Californian and a long-time resident of San Francisco.  Growing up in Sacramento and Lodi, he began drawing almost before he could write and thus began a fascination with light and shadow that took him through serious study of drawing, photography, cinematography (after moving to San Francisco) and ultimately, painting.  Born with mild red/green color-blindness, Kevin limited his art for many years to pastel portraits in one to three colors on toned paper.  Later, Kevin began to study the color wheel, color harmonies and design, ultimately formulating a way around this visual limitation to create harmonious landscape paintings.

An early realization upon embarking on this serious study was that he found there was a clear demarcation in the physical/optical appearance of paintings between those produced before the turn of the nineteenth century and those after; approximately around the time of the emergence of French Impressionism.   Walking through the galleries of the Palace of the Legion of Honor, where paintings can be viewed in clear chronological order, Kevin noticed a rather sudden change in the depth and luminosity of the earlier works compared to later ones.   Upon learning that this difference was due almost entirely to the change in the way paintings from these two eras were physically made (earlier works were built up in separate translucent and transparent, optically interactive layers; later ones almost always constructed of opaque strokes of paint that covered up previous touches), Kevin began an extensive study of the history of painting techniques to discover the reason for the complex luminosity he so admired in the pre-Impressionist works, eventually developing a synthesis of techniques from several different eras of painting, based primarily on monochrome underpainting followed by transparent and translucent color layers.

Since the layered approach to painting precludes plein air painting (outdoors before the subject), Kevin takes full advantage of his years of photography study (largely through the writings of Ansel Adams), several years as a custom printer in commercial photo labs (exercising subtle control of values to produce fine art prints for discerning professional photographers) and a decade of lighting study working on feature films as a Director of Photography, to create landscape photographs that inspire the paintings produced in the studio.    These images are 're-imagined' with image editing software to optimize them for use as inspiration for a painting - optimizing value balances, critical cropping, reducing or eliminating distracting and irrelevant details, shifting the placement of key compositional elements, and so on.

Kevin's preferred subjects are small intimate details of the landscape, rather than broad vistas, inspired often by the glowing effects of grasses and foliage illuminated from behind in the  late afternoon or early morning. 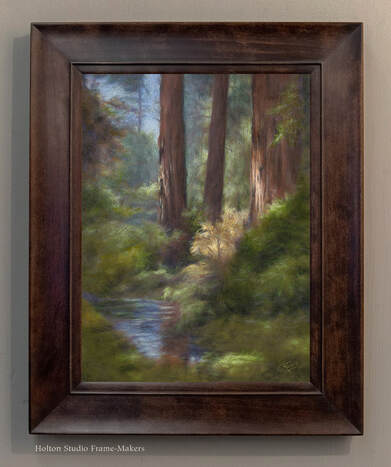 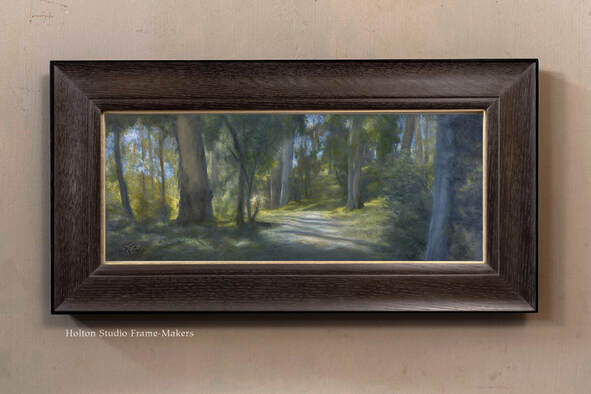